Whether they are exploring new teaching methods, organizing community service projects or participating in international sporting events, students across Esol Education schools are always up to something exciting! Browse through these articles, or download STRIDES, our official newsletter, for in depth coverage of the latest happenings at our schools.

<Back to News
A Bite of Big Apple 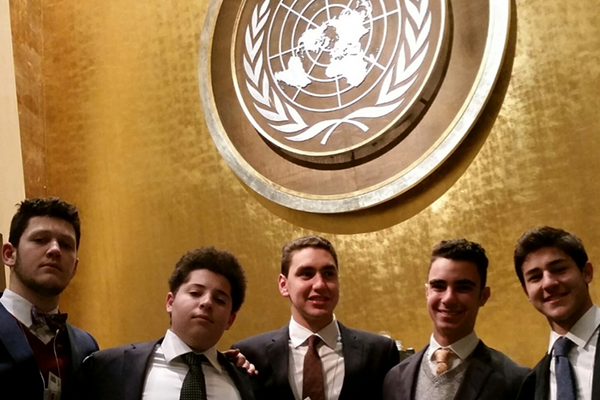 Eleven students from Grades 10 and 11, accompanied by two teachers, left Cairo on March 8 to attend the National High School Model United Nations (NHSMUN) conference. The delegation was the only one from Egypt, and one of three Middle Eastern schools this year. This was the first time AISWMUN had attended NHSMUN, and the team was thrilled to be representing the delegations of Senegal at the Security Council, India in the General Assembly committees and Egypt in the League of Arab States. The opening ceremony took place in the General Assembly hall of the United Nations building, allowing students a peek inside the venue of some of the most intense international discussions ever held. Preparation for the conference was intense, but the students' effort paid off, performing strongly and representing AISE-W and their respective countries well, with an Honorable Mention in the League of Arab States committee, a Best Speech award in Human Right Commission and presenting to the plenary session of over 800 students from around the world. This was the third international conference for AISWMUN this year, with great performances in Athens, Greece and Dubai prior to New York. Dorra Group generously supported the school's MUN GROUP this year, and AISE-W would like to thank them for their continued support. The team is looking forward to continuing to build on its visit to the heart of the United Nations in the next school year!